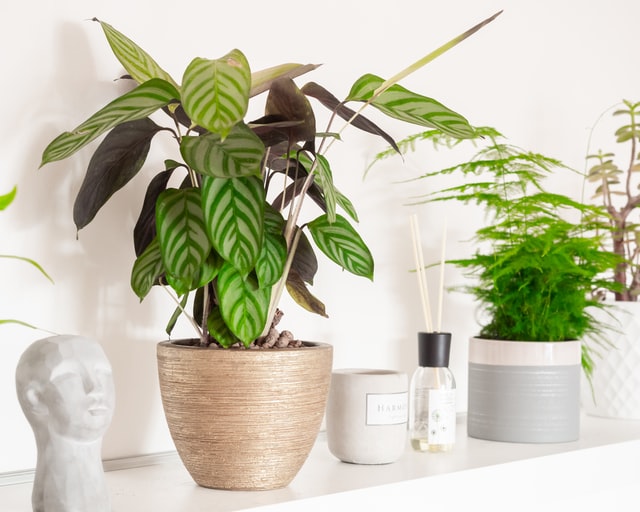 So, what are the most common Calathea varieties, you might wonder? The fact is it is one of the most significant groupings of plants. Besides, it is a common houseplant that is known for its lovely leaves. There are a variety of Calathea flavors, each one distinct in its own right! Regardless of which of these Best Calathea Types you choose, its eye-catching leaves will be sure to turn heads in your home!

15 most popular types of Calathea

Round-leaf Calathea may struggle to thrive and will drop leaves if not given enough sunlight. To maximize the potential for development, place it less than 3 feet from a south-facing window as it is the fastest growing plant. To discover how the current weather in your location impacts the placement of Round-leaf Calathea in your home, select your region.

Calathea Lancifolia is a stunning indoor plant. These Calathea types have lance-shaped upright leaves with long wavy margins that grow in bunches and spread slowly over time. Its markings and patterns closely resemble those of a reptile. On a pale green background, the leaves are varied with dark green strokes. This looks great at home as the undersides are a crimson red color with a velvety texture.

Calathea types named Furry Feather also known as Goeppertia Rufibarba. Other popular names for this plant are Velvet Calathea, and Prayer Plant. It’s a soft, evergreen perennial in the Marantaceae family that’s commonly used as a houseplant. The wavy leaf margins are eye-catching! The leaves are lance-shaped and green, with wavy edges and vivid purple undersides. It is one of the best types of Calathea that have fine hair covering the leaves, giving them a velvety feel that is gentle to the touch.

Dottie’s foliage is a dark green that almost looks black, with Fuschia pink borders on each leaf. Maintain humidity by placing it in bright, indirect sunshine and misting it on a regular basis. These Calathea types don’t need extra sunlight, so you can keep it anywhere at your place.

It’s also known as Pin-Stripe Calathea because of the long and thin stripes that cover the entire plant. The color combination is similar to the above-mentioned variants, with the upper half shiny green and the lower part purple. This can easily style your home as the upper surface, on the other hand, is ornamented with pinkish-white pinstripes.

These Calathea types, like most variegated plants, require a lot of diffused light. The leaves will fade and lose their marks if they are exposed to direct sunlight. They can take some shade, although the finer the leaf becomes the more indirect the light.

These types of Calathea are also known as Calathea White Fusion, have unusual leaves that resemble brush strokes in white, lilac, and green. It’s a really decorative Calathea type because the underside is also purple. Calathea White Fusion features remarkable white, lilac, and green foliage that resemble brush strokes. Because the underside is likewise purple, it’s a particularly attractive Calathea.

It’s also known as Eternal Flame or Tasmania Bloom because of its lovely golden blossoms. They can even endure for two to three months if the conditions remain constant. Calathea blooms, on the other hand, are extremely delicate. Mist the leaves only, never the blooms, when spraying the plant. This one is a relative newcomer to the plant world, as it is one of the newest to be acknowledged as a popular houseplant. This is due to the fact that it is more difficult to maintain than the other family members.

When you do, you’ll discover a stunning mosaic-like structure all over the leaves, which is exactly what distinguishes Calathea Musaica. It’s also uncommon. Calathea types look fantastic at home because they have nyctinasty in common with the rest of the family. It’s a beautiful show in which the foliage changes in response to the daily light cycle.

Calathea ‘Pin-stripe’ has oblong dark green leaves with pink-white stripes printed on long green stalks that grow to be about a foot long. When taken home, it would look perfect at corners because it thrives in a well-draining, slightly damp soil.

Calathea zebra plants are endemic to Brazil, and their brilliant green leaves are striped in a beautiful feather-like pattern in white, yellow, or pink. Care for zebra plants in the home, like tropicals, is not as tough as some gardeners may believe. These Calathea types of houseplant care may appear difficult at first, but once you’ve established a routine, the rewards of this magnificent plant will be well worth your efforts.

The dark green leaves of the white tiger have a lovely white pattern in the shape of waves. These Calathea types may appear simple, yet they have pleasing white, green, and lilac marbled leaves with a pale purple underbelly. The White Fusion is one of Calathea’s most distinguishing varieties. It’s a rare beauty that takes a long time to mature but makes a beautiful addition to any indoor jungle.

Misto Calathea is an exquisite hybrid with mid-green leaves that are feathery in the middle and have light-green variegation. Calathea comes in many different types, but one of the most common has beautiful, dark green leaves with scalloped edges and silver brushmarks on the top. These Calathea types have attractive leaves that will look awesome in living or bedrooms.

If you enjoy the color green, you will love this plant. The foliage features a bright green feathering that runs from the center of the leaves to the dark green ends. Calathea Beauty Star enjoys indirect light that is medium to bright, therefore it’s best to put it in front of an east, west, or north window.

These Calathea Types have a sheen to them, with silver and emerald green tones on a green base. The backs of the leaves have a purple hue to them. It’s ideal to put it in a room like a bathroom or a kitchen. Calathea Medallion takes pleasure in the warmth. It prefers a temperature range of 65 to 85 degrees Fahrenheit. Although it is non-toxic to both animals and people, it is believed to be quite delectable, so keep it away from your pets if you want your plant to live.